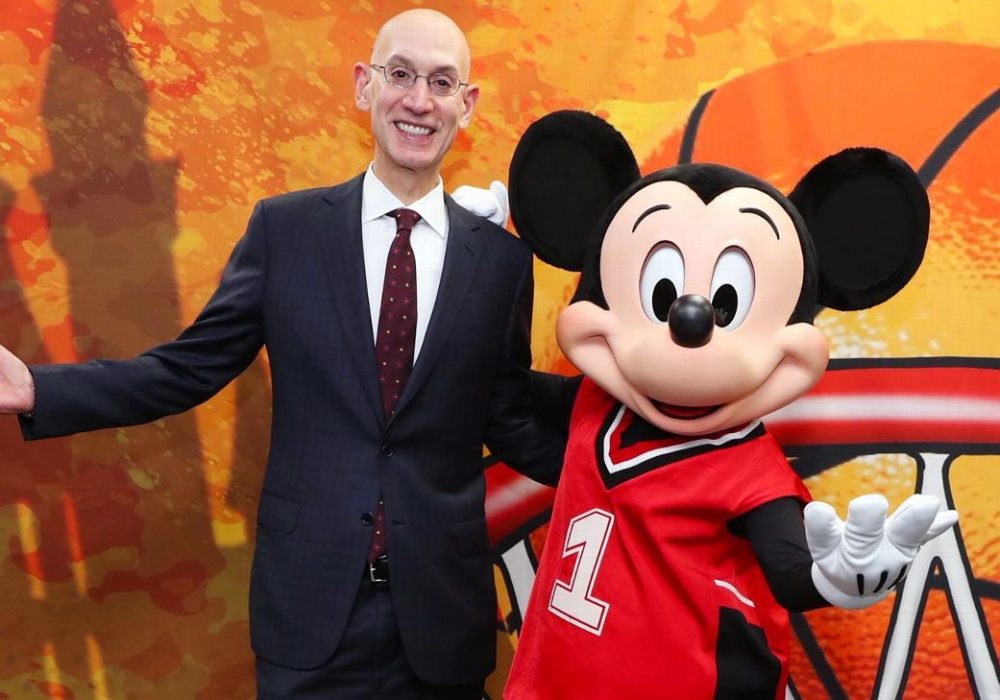 Gregg Popovich is a longtime advocate of the more casual attire seen in international play.

When the Miami Heat promoted Erik Spoelstra out of the video room and into an assistant coaching position, there was one problem: Spoelstra owned no suits. The league’s dress code for coaches, codified in a memo sent before the season, mandates every coach wear a dress shirt (or “dress sweater”) and sport coat.

Pat Riley, Spoelstra’s boss and one of the all-time sports fashion plates, lent Spoelstra several of his Armani suits. Riley is taller than Spoelstra, with broader shoulders. “Pat’s suits were huge,” Spoelstra said. “It was almost like they had football pads in the shoulders. I looked like the dude from the Talking Heads video.”

Spoelstra has improved his style game over two decades on Miami’s bench, but he didn’t have to bring any suits to the NBA’s campus at the Walt Disney World Resort in Orlando, Florida. The National Basketball Coaches Association polled its members and found heavy support for a more casual look in Orlando: polo shirts, slacks, and sneakers. The association took its findings to the league office, which approved the casual style for the NBA’s restart, said Dallas Mavericks coach Rick Carlisle, president of the NBCA.

Spoelstra is almost afraid to say it out loud, but he prefers the polo look. “Pat would be shocked,” Spoelstra said. “There is so much less to think about. I feel more mobile. The thing I hate most about suits is wearing dress shoes.” Several head coaches echoed Spoelstra’s remark about how the casual look simplifies sartorial decision-making — and packing, a constant headache during normal times.

Spoelstra’s turn marks an important win for Team Casual, which feels it is gaining momentum in the bubble for more lasting change. San Antonio’s Gregg Popovich, the elder statesman among head coaches, has wondered aloud — including in his role as head coach of Team USA in international play, where the polo look rules — why coaches in sweaty gyms must wear suits. Some pro-suit coaches were wary of proclaiming their allegiance and standing against a beloved mentor to so many.

Frank Vogel, head coach of the Lakers, followed the same path out of the video room as Spoelstra. Before his first game as a graduate assistant under Rick Pitino at the University of Kentucky, Vogel was scribbling scouting tips on the white board when Pitino approached. “You’re not wearing that, are you?” Pitino asked him.

Vogel was wearing his only suit — a graduation gift from his parents. He told Pitino he was going to wear it for each game, and change out shirts and ties to avoid detection. Pitino would not have it. He invited Vogel to his house that night, and gave him 15 suits — Armanis and Brionis — plus the number for his tailor, Vogel recalled.

Lakers coach Frank Vogel is going with the flow in Orlando, Florida, but he prefers suits for coaches. Ashley Landis – Pool/Getty Images

Vogel remains on Team Suit. “It’s the Pitino family tree,” he said. Vogel has joked that he wants to be “the Dan Reeves of the bubble,” a reference to the former head coach of the NFL’s Denver Broncos, New York Giants, and Atlanta Falcons — who often favored suits in a mostly non-suit sport..

The coaches’ association has taken periodic polls, most recently two seasons ago, and found “overwhelming support” for suits over polos, Carlisle said. Carlisle spent two years as an assistant with the New Jersey Nets under Chuck Daly, perhaps the most fashion-forward head coach in NBA history. Daly had a sponsorship deal with Hugo Boss. On one road trip, he invited Carlisle to a Hugo Boss outlet for a shopping spree. “It was the nicest stuff I had ever had to that point,” Carlisle said.

Carlisle has never even gone without a tie in an NBA (non-bubble version) game, he said: “If I ever did that, Chuck would roll over in his grave.” Carlisle is perhaps the most powerful voice on Team Suit. “The legacy of guys like Chuck Daly, Pat Riley, Lenny Wilkens — that is a big part of this,” he said

Daly directed Alvin Gentry, now the head coach of the New Orleans Pelicans, to his pet suit shop outside Detroit when Gentry became head coach of the Pistons in the late 1990s, Gentry said. “I thought I had really made it,” he said. But in the bubble, Gentry has shifted to Team Casual, he said.

The late Flip Saunders’ careful attention to sideline style rubbed off on his son, Ryan, now the head coach of the Minnesota Timberwolves. “I like my suits,” Saunders said. “I learned that from my dad. You feel good if you feel like you look good.”

But watching Orlando from afar, Saunders has felt the stirrings of rebellion. “After being in quarantine and not even putting on jeans for six months, I’m leaning toward basketball casual,” he said. “My dad would have a fit.”

Other notable backers of the polo look: Boston’s Brad Stevens, Denver’s Michael Malone, Orlando’s Steve Clifford, Houston’s Mike D’Antoni, Charlotte’s James Borrego, Sacramento’s Luke Walton, Golden State’s Steve Kerr, and Washington’s Scott Brooks. (Kerr was so passionate, he requested his name appear on this list in larger font — John Hancock-style.) “I was against [polos], but now that I’m down to my summer weight, I love them,” Brooks said. Most of the above coaches said they would support carrying over the look to the normal NBA environment.

“With the coaches all matching, I think we maintain the professional look,” Walton said.

Sacramento’s Luke Walton is on Team Casual in the debate among coaches. Kim Klement-Pool/Getty Images

Dwane Casey, head coach of the Pistons, likes both looks and would prefer coaches get to choose each game. Brett Brown, head coach of the Sixers, leans Team Casual but is open to a middle ground. The Sixers have ordered custom dress shirts — non-polos — for the playoffs in Orlando, he said. “I’m a Jeep-and-dog guy from Maine,” Brown said. “When I was young, I cared more. Now whatever suit is closest to my hands, I just throw in the suitcase. There is a real disdain for packing.” (Brown has also served as head coach of Australia’s national team, so he is comfortable in the polo look, he said.)

“I told my kids I’d be a better coach in polos,” Borrego said. “There are so many fewer decisions to make.” (Sam Hinkie, the former president of basketball operations of the Sixers, famously bought a huge supply of blue blazers to combat “decision fatigue.”)

J.B. Bickerstaff, whose father, Bernie, coached in the NBA for 40 years, is a traditionalist. “The history of the suit means something,” he said. Others on Team Suit include Toronto’s Nick Nurse; Atlanta’s Lloyd Pierce; and Chicago’s Jim Boylen.

The NBA is back! Answer questions on the seeding games for a chance at a guaranteed $5,000! Make Your Picks

Quin Snyder, head coach of the Utah Jazz, pitched the notion of intra-staff suit uniformity, which is not uncommon in European leagues. When Snyder was an assistant at the powerhouse CSKA Moscow earlier this decade, Ettore Messina, then CSKA’s head coach, outfitted the entire coaching staff in the same suit and tie for each game. “And Ettore has great taste,” Snyder said. (Messina confirmed, via text, that he indeed has great taste.)

“What we did at CSKA provides an element of professionalism and also captures the pragmatic component of not having to overthink,” Snyder said.

That system would prevent each individual coach from showing off his or her style. (In a memo sent to teams in October, the league for the first time detailed a dress code for female coaches — though it is very brief. “Each female coach must wear business attire,” it reads. “Athletic shoes, sandals, flip-flops, and work boots are prohibited.”)

One of Saunders’ assistants — Saunders won’t name him — has already expressed concern about potentially losing stylistic independence, Saunders said. Mike Brown, Kerr’s lead assistant and the former head coach of the Lakers and Cleveland Cavaliers, picks every element of his outfit for every game and tracks his choices so he doesn’t wear the same outfit twice against the same opponent, he said.

“I have a whole process,” Brown said. “I like guys being able to show their personalities with their suit games.”

But like Vogel and Spoelstra, Brown remembers being a young assistant short on cash. In the 1990s, he hunted deals at K&G Fashion Superstore, which sometimes offered specials that included a suit, shirt, and tie for $99, Brown said.

Starting in 2008, the coaches association struck a deal with Men’s Wearhouse to outfit head coaches in Joseph Abboud suits. The full deal did not apply to assistants, though they received a discount — plus shoes and belts as part of smaller deals, per previous reports. (The Men’s Wearhouse deal expired after last season, sources said.)

Uniformity across teams matters, too. Even several pro-polo coaches conceded it might look awkward for a suit staff to face a polo staff. “There is a visual extreme,” Carlisle said. “One staff looks like they are at a wedding, and the other looks like they are about to tee off.”

A few polo backers worried short-sleeved versions would leave them shivering in the league’s chillier arenas. They wondered about the possibility of long-sleeved polos.

There is almost unanimous agreement the polo look makes sense for the less formal environment in Orlando, which many compared to the NBA’s Summer League — another polo event. Some on Team Casual might get cold feet about transferring the look to normal games. Others aren’t passionate enough to repel an offensive from Team Suit.

But the Orlando bubble has emboldened Team Casual.

“Maybe this experience will give it some momentum,” Malone said.