Juan Rodulfo
post-title The White House appears to have silenced the surgeon general for his remarks on racial disparities in the coronavirus outbreak, as data shows black communities are being hardest hit
May 28 2020 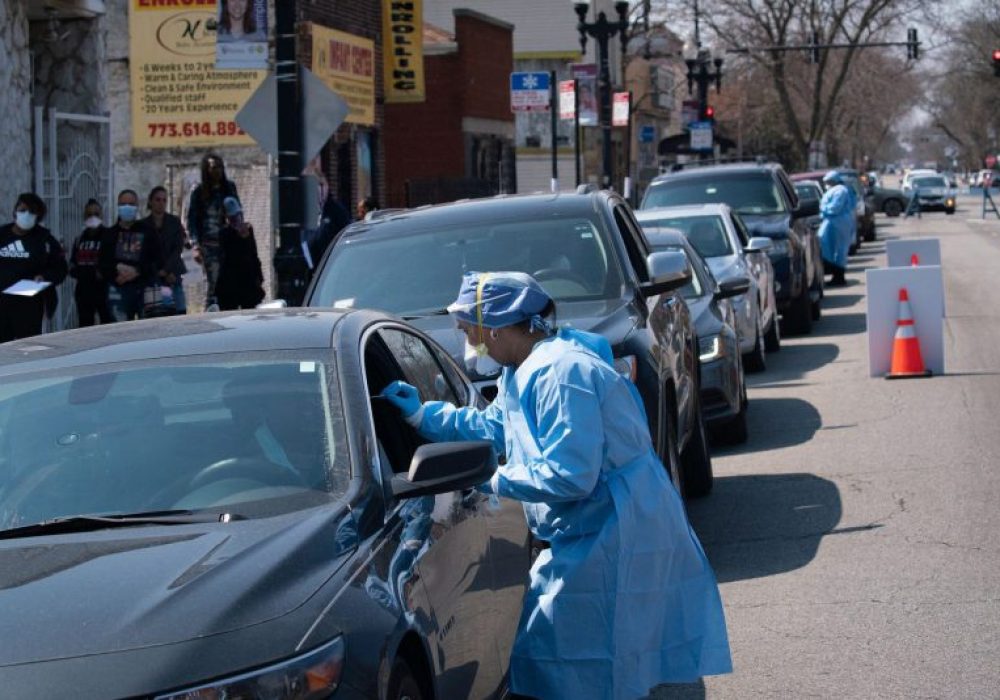 The White House appears to have silenced Surgeon General Jerome Adams, one of the only voices speaking about how the coronavirus outbreak is impacting minority communities, according to a new report from Politico.

Adams hasn’t attended a press briefing since April 10, when he made controversial remarks about the transmission of coronavirus in minority communities, suggesting that they were engaging in behaviors that might make them more prone to catching the disease.

Since then, he hasn’t been invited to take part in a White House coronavirus press briefing, and has gone from making more than ten TV appearances in a week to just one last week.

The White House and Surgeon General’s office did not immediately respond to Business Insider’s request for comment.

Foto: People wait in line in their cars to get tested for COVID-19 at Roseland Community Hospital on April 3, 2020. Source: E. Jason Wambsgans/Chicago Tribune/Tribune News Service via Getty Images

Health officials told Politico that Adams’ silencing has been a loss, as he’s been a major advocate for communities of color, and one of the few members in the US government discussing the outbreak’s impact on minority groups.

“No one at the task force is really talking about this, consistently, but Jerome,” one official at the Department of Health and Human Services (HHS) told Politico.

Another former HHS official told the outlet that Adams tends to get in trouble when he goes “off-script,” but said “his heart is in the right place.”

While there remains limited information on the disease’s impact by race in the US – just four states have broken down their coronavirus cases by race so far – existing data shows that African Americans have an outsize risk of getting a case of COVID-19 so severe that it leads to death.

Data from Michigan shows that while African Americans make up 14% of the state’s population of 1.4 million, they represent 40% of the coronavirus deaths in the state

Michigan has just started reporting on coronavirus cases by race.

African Americans are 14% of that state’s population but 40% of deaths.

NYC should publish this data as well, so we get the picture here. pic.twitter.com/u0UeWZfJvA

It is a similar story in Illinois, where 528 African Americans have died out of a recorded 1,349 deaths, representing 39% of the total figure. The black community in the state numbers 1.8 million, or 14.6% of the population.

The African American community has been disproportionately affected in Kansas and North Carolina as well, according to the data released by the two states.

In Kansas, where just 6.1% of the state’s population is black, 31 out of the total 100 coronavirus deaths were African-American.

In North Carolina, black people make up 39% of the total coronavirus cases, despite only accounting for 22% of the total population.

She noted that “as a group, African Americans in the US have higher rates of poverty, housing and food insecurity, unemployment or underemployment, and chronic medical conditions, and disabilities.”

Dr. Camara Jones, a family physician, epidemiologist, and visiting fellow at Harvard University, also told ProPublica: “This is the time to name racism as the cause of all of those things. The over-representation of people of color in poverty and white people in wealth is not just a happenstance … It’s because we’re not valued.”

A phenomenon called the “Tuskegee Effect” – a phenomenon referring to African Americans being less likely to seek medical help for ailments because of a mistrust of a historically racist US health system- has also been cited.

It is also possible, however, that the Illinois and Michigan data are skewed by the fact that the largest coronavirus outbreaks in those states are in Chicago and Detroit, which both have large African American populations.

While it appears that black communities are being harder hit by the outbreak, demographic information has by and large been a missing puzzle piece to the understanding of the virus.

According to data released by the Centers for Disease Control and Prevention (CDC) on Sunday, 65% of the cases had no specified race.

Kristen Clarke, executive director of the Lawyers’ Committee for Civil Rights Under Law, said it was “astounding” that the CDC has not collected more complete demographic data, according to Politico.

“The department of Health and Human Services has not offered a concrete plan about how it intends to tackle the problem in front of us,” Clarke told reporters on Monday.

“The fact [is] they do not have race information tied to all of their data. We know that our communities are being ravaged by COVID and the federal government has a role to play.”

Kirsten Nordlund, a spokesperson for the CDC, told Politico that it has been a challenge to get demographic information from health systems that are extremely busy tackling the pandemic.

“We are exploring using other avenues to supplement this information when possible.”