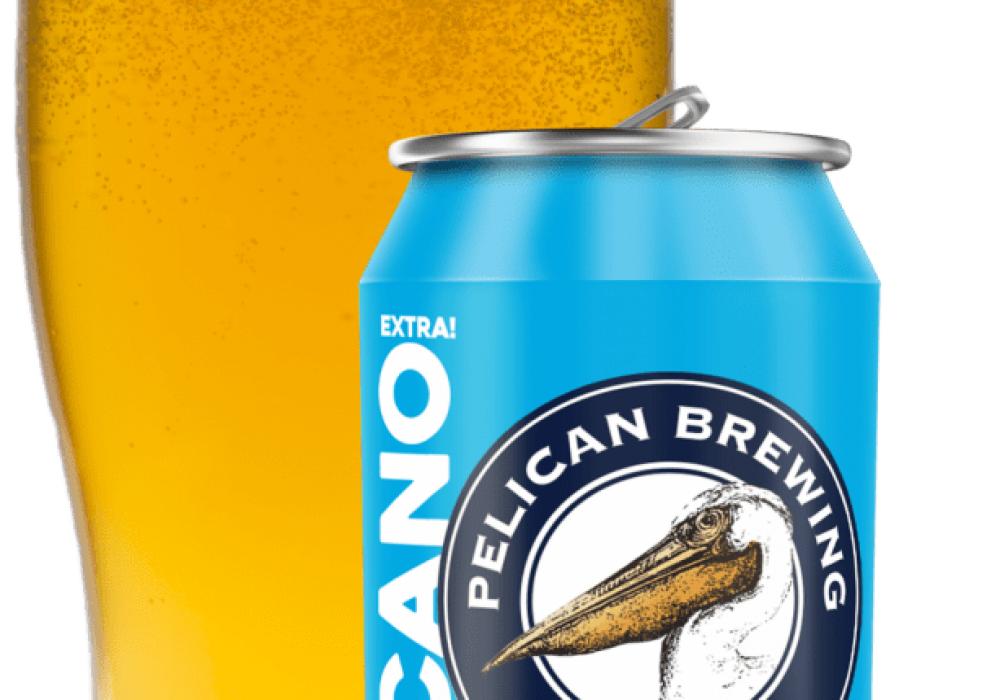 Pacific City, Ore. — Pelican Brewing Company welcomes back popular Gold Medalist Pelicano EXTRA! Lager Cerveza just in time for sunnier days. Ultra-refreshing with floral and spicy hops, bright straw color and clean finish, Pelicano is the perfect pairing for your Cinco de Mayo fare and festivities! The seasonal brew, which was honored with both Gold and Silver Medals when it was first brewed as a draft-only beer in 2016, returns now in 12 oz. on-the-go cans and six-packs perfect for your quarantined backyard BBQ, taco takeout or patio hangs.

Whether you are wishing you were on a beach or sitting on your own patio, this PeliCAN beer was made for you. Inspired by the lagers of Latin America, this brew is the ultimate easy drinking beer—incredibly refreshing but without sacrificing flavor. The clean six-row malt profile is highlighted by a floral Tettnang hop aroma and supported by a spicy hop finish. Say adios to the lime—Pelicano es una cerveza muy deliciosa!

“Pelicano Extra! is a great summertime beer that bridges the gap between flavor and approachable drinkability—clean lager characteristics let the enjoyable malt and hop flavors shine through without any heaviness or harshness,” says Pelican founding brewmaster, Darron Welch. “Pelicano is full of character, refreshing, flavorful and smooth—perfect for paying homage to our beach roots.”

Pelican Brewing continues to operate their production brewery under guidelines set forth by the CDC for food manufacturing facilities. You can find award-winning Pelican Beer at your nearest neighborhood market or grocery store here: https://pelicanbrewing.com/beer-finder/

Founding brewmaster of Pelican Darron Welch continues to be one of the most decorated brewers in the Pacific Northwest, earning well over 450 medals including several Gold last year alone at the World Beer Cup, Australian International Beer Awards and North American Beer Awards.

Pelicano EXTRA! is born at the beach by a team of award-winning craft beer makers known for brewing styles of beer that they themselves love to drink. Salud!

Pelican Brewing Company was born at the beach in 1996. Here, in front of a rundown old building at the water’s edge, stood three enthusiastic young folks whose thirst for great beer overshadowed their understanding of what it would take to build a brewery. They did it anyway. Thanks to the vision of founding owners Jeff Schons, Mary Jones and brewmaster Darron Welch, Oregon’s only beachfront brewpub became one of the state’s most popular destinations. And now 24 years later, Pelican Brewing Company is an iconic beach brand and one of the most decorated craft breweries in Oregon. Pelican has been honored with more than 450 awards including the prestigious 2015, 2016, 2017 Australian International Beer Awards Champion Medium International Brewery; 2014 World Beer Cup Champion Small Brewery; 2013 Great American Beer Festival Large Brewpub of the Year. Why? Pelican brews are playful, but not frivolous. Brewed with purpose, passion and a deep respect for the craft. Pelican operates brewing and brewpub facilities in Pacific City, Cannon Beach, and its state-of-the-craft brewery in Tillamook, Oregon where it brews 40,000 barrels of award-winning beer annually and distributes to six states. Pelican’s vision, its beer and values were born at the beach where the team wakes up each day in a place that reminds them that amazing is possible. Cheers, Fellow Fanatics!