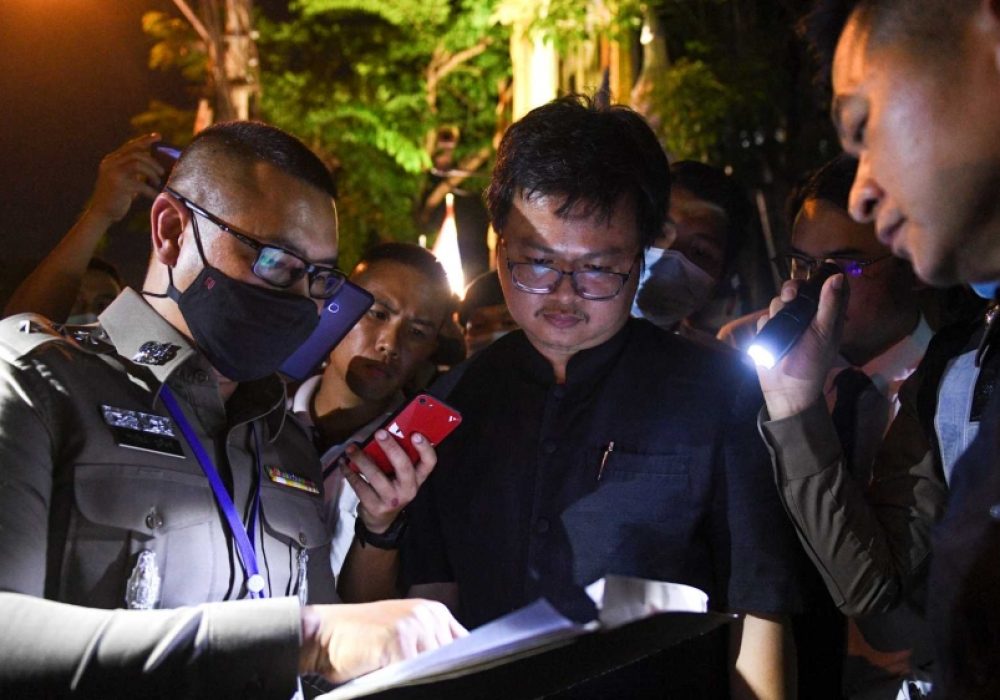 A Thai rapper – whose anti-military government music has gone viral – has been arrested, according to a group of human rights lawyers, hours after police re-arrested prominent activist Arnon Nampa for his role in a protest calling for reform of the powerful monarchy.

Dechathorn Bamrungmuang was brought to a police station outside the capital Bangkok on Thursday “for documentation”, and is expected to be transferred to Samran Rat central station, according to Thai Lawyers for Human Rights (TLHR).

In a separate social media post, June Sirikan, a TLHR lawyer, wrote that the rap artist was being charged with “sedition and other charges”, after appearing and singing on stage at recent student-led pro-democracy protests.

Dechathorn, also known to his fans as Hockey, is the founder of the group Rap Against Dictatorship, which performed in several anti-government protests in recent weeks.

The group’s single, What My Country’s Got, brought them to fame but triggered threats of legal action for its criticism of the Thai government, which is led by former military officials. They have more than 500,000 followers on the video platform, YouTube, and their songs have attracted more than 100 million views.

Overnight, at least four other activists were arrested, including lawyer Arnon Nampa – the second time he has been arrested this month.

Arnon, 36, has been at the forefront of a movement that has staged protests almost daily in Thailand and was the first to call openly for changes to King Maha Vajiralongkorn’s role, breaking a long-standing taboo.

According to reports, Arnon had also been charged with sedition and inciting public unrest, among other offences. He is already facing several other charges.

“The Thai government’s repeated promises to listen to dissenting voices have proven meaningless as the crackdown on pro-democracy activists continues unabated,” Brad Adams, Asia director at Human Rights Watch said in a statement on Thursday. “The authorities should right their wrong and immediately drop the charges and release Arnon and other detained activists.”

Another arrest! Member of @RapAgainst Dictatorship #rappers who sang on stage at youth-led pro-democracy protest! He’ll be charged w/sedition& other charges. #WhatsHappeningInThailand https://t.co/VjpA8AA9xM

Prime Minister Prayuth Chan-ocha, a former leader of the military council that ruled Thailand, rejected activists’ accusations that last year’s election was manipulated to keep him in power, and acknowledged student demands while warning that they should not touch the monarchy.

“There are 67 million Thais,” Prayuth told reporters on Wednesday. “I believe the majority do not agree with the protesters.”

Demonstrators challenging the monarchy say greater democracy is impossible without changes that would limit the king’s constitutional role in a country that has had 13 successful coups since absolute monarchy ended in 1932.

The Royal Palace has not responded to the demands.

Insulting the monarchy can lead to a 15-year jail sentence, but Prayuth has said the king requested that there be no prosecutions under the lese majeste laws for now. Sedition carries a term of up to seven years.

The protest movement drew 10,000 people to the biggest demonstration in years in Bangkok on Sunday. According to their social media, Rap Against Dictatorship artists also attended that event.

Lawyer Arnon Nampa, centre, was arrested on Wednesday night, the second time he has been taken into custody by police this month [Chalinee Thirasupa/Reuters]

Hundreds of Thai high school students rallied at the education ministry on Wednesday and flashed three-fingered “Hunger Games” salutes in support of anti-government protests and to demand more freedom in schools.

Many also wore white ribbons to show their support.

Meanwhile, the Ministry of Digital Economy and Society filed a cybercrime complaint against exiled academic Pavin Chachavalpongpun for creating a Facebook group deemed critical of the monarchy, a spokesman said.

The group, called Royalist Marketplace, has more than one million members.

The ministry said it filed the complaint after Facebook had not acted on its request to shut the group down.

“The ministry’s action is the crudest form of information censorship. It goes against the freedom of expression that we are all entitled to,” Pavin told Reuters news agency.