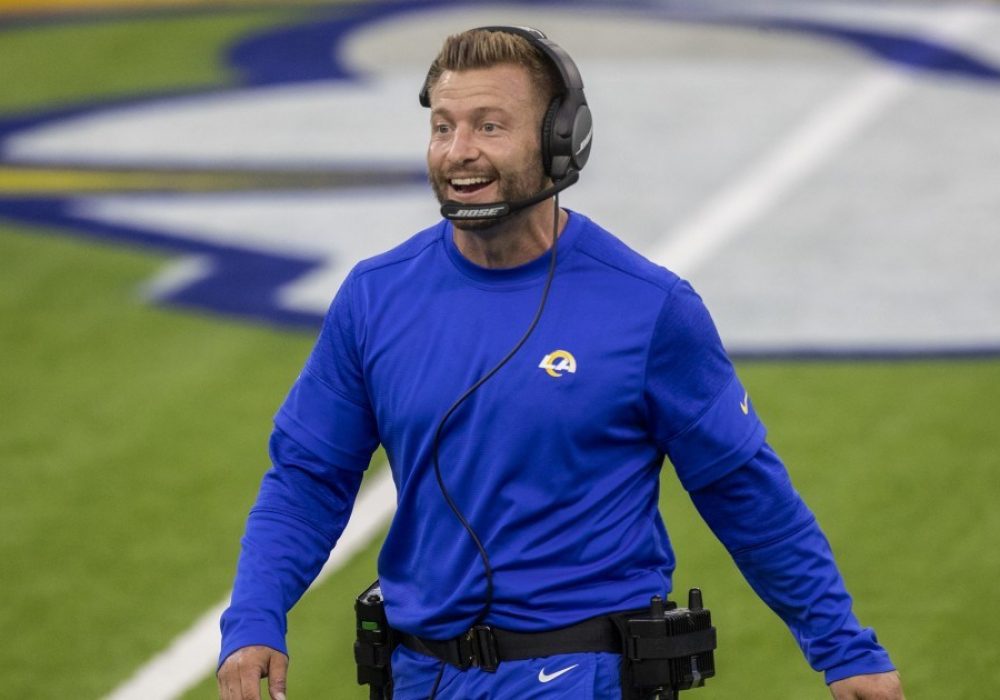 He is still a kid, but he is no longer The Kid.

He still bounces around with the mirth of a 34-year-old, but his sighs are heavier, his regrets deeper, his armor worn thin.

He is entering just his fourth season, but it feels as if he’s been here forever.

School will soon be out for the Rams’ Sean McVay, and he knows it.

His core courses complete, his honeymoon of an NFL coaching education over, this is the year he must prove he can really coach.

He still exudes the same contagious energy, the over-the-top optimism, the connective burn that pushed the Rams into the playoffs in each of his first two seasons, including a trip to the Super Bowl.

Yet with his team coming off his first postseason miss, facing new hurdles at every turn, The Boy Wonder has people wondering.

How will he fill the leadership void created by the loss of veteran defensive coordinator Wade Phillips and special-teams coordinator John Fassel?

How will he deal with the loss of the consistent threats posed by running back Todd Gurley and wide receiver Brandin Cooks?

How will he bring the team together with a defense that has been gutted of valuable veterans such as Dante Fowler and Cory Littleton?

And, oh yeah, how can he help quarterback Jared Goff halt his regression?

For three seasons, McVay was able to grow into one of the NFL’s most innovative and exciting coaches. But he’s always been surrounded and supported by veteran minds and plenty of talent. He’s been a spark, but he’s never had to start the fire.

While the hobbled Gurley drove McVay crazy with load-management issues, Gurley still commanded respect from opposing teams. Now the Rams will deploy a series of running backs led by solid Malcolm Brown, flashy rookie Cam Akers and oft-injured Darrell Henderson. In other words, they have no idea what they have.

And can McVay the Quarterback Whisperer scream the greatness back into Goff? After receiving a $134-million extension, Goff declined in every major statistical category last season and ranked 22nd with an 86.5 passer rating.

It was, perhaps not coincidentally, a question about Goff that might have led McVay to offer his most revealing emotion entering this season. The coach was asked whether, for the first time, Goff was going to have to gather himself to come back strong.

“I think that goes for both of us,” McVay said.

He is always one to fall on his sword. Rather refreshingly, no coach in professional sports rips themselves during postgame news conferences as much as McVay. Remember, this is the guy with the courage to openly acknowledge that he was, “definitely … outcoached,” by New England’s Bill Belichick in the 13-3 Super Bowl loss.

But his latest problems are about more than one game. This is about a season, last season, a lost season.

Even though they won nine games — the most by a nonplayoff team — the schedule was dotted with devastatingly bad losses to Tampa Bay, Pittsburgh, Baltimore and Dallas. In some of those defeats, the Rams simply didn’t seem ready to play. In others, such as the 17-12 loss to the Steelers with Gurley on the bench for chunks of the fourth quarter, McVay did not manage the game well.

McVay, who received a contract extension last summer that runs through 2023, knows all this. He admits to every bit of it.

“I think there’s a lot of motivation to get this thing right and back on track to the standard that we have,” he said.

And he knows it starts with him.

“There’s a plethora of things that you always want to get better on,” he said.

Even in those cases in which the blame clearly falls on the player, he’s still willing to bear the brunt of the criticism.

“I don’t ever want to put our players out there,” he said, later adding, “My job is to make sure, especially as a play-caller or head coach, that our decisions are giving our players the best chance for success. When they’re not, I’m not afraid to admit to that.”

He continued, “I’m not afraid to take ownership for my mistakes because there’s certainly some that occur every single week.”

This season will show the depth of the connection McVay has made in that locker room, and it’s amazing this should even be a question: Who wouldn’t want to play hard for a guy who not only willingly absorbs all the heat but also embraces it?

“I don’t feel any more pressure,” McVay said about this season. “One of the beauties of the NFL is that you have to prove it every year. … That’s really what excites me. … The pressure is a privilege, actually.”

After spending the pandemic-shutdown offseason with his fiancee at their dazzling Encino home, he said he’s never felt better about tackling that pressure.

“I feel rejuvenated. … I’m thinking I’m in better shape mentally, physically and just kind of emotionally … than I’ve been in a few years,” he said. “The quarantine … that’s been one of the things you can kind of bring a positive light from.”

McVay was unafraid to show the world his physical rejuvenation when, during the first episode of HBO’s “Hard Knocks” documentary series, he stripped off his shirt and flexed his buffed frame while lounging in his pool. Based on the jeering response from friends nationwide, maybe not the best idea.

“Right after I did that, I said, ‘Why the hell would I do something so stupid?’” he said with a laugh. “I was feeling good. I did a couple of push-ups beforehand … then I thought, what kind of awareness is that?”

Ah, but it turns out, there was a method to his near nakedness.

“All my buddies and other coaches were more the ones that gave me [hassle], but the players were like, ‘Not bad, man, not bad,’” McVay said.

Yes, he does have broad shoulders. Yes, he’s definitely going to need them.