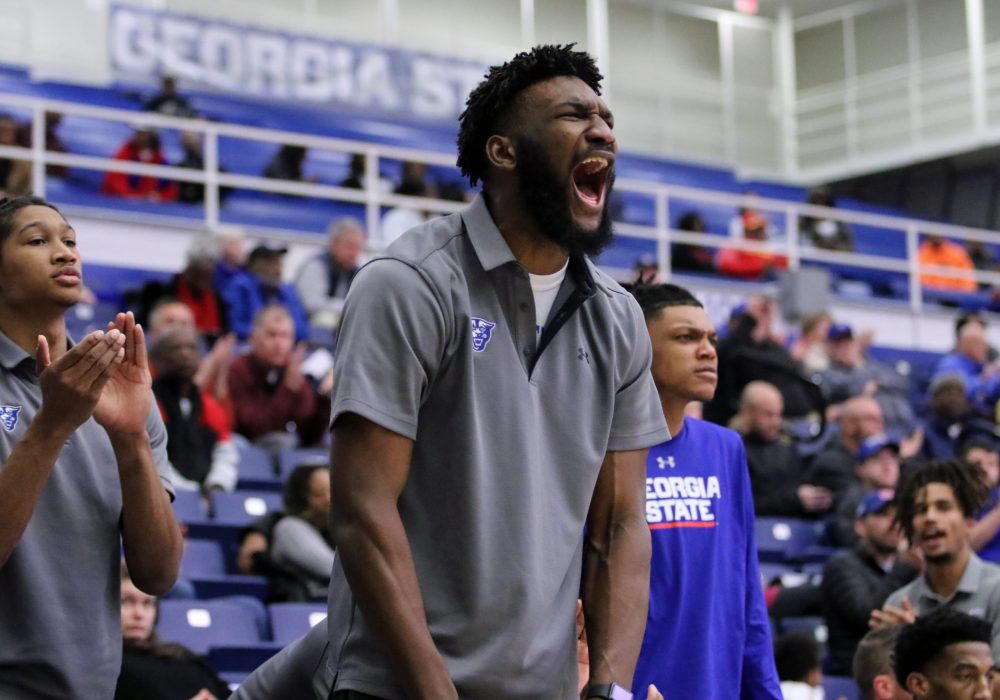 Eliel Nsoseme hypes his teammates during a game during the 2019 season. Photo Submitted by GSU Athletics

Born in the Democratic Republic of the Congo, Panthers men’s basketball Eliel Nsoseme has had an interesting path leading him to Georgia State.

The 6-foot, 9-inch junior forward looks to significantly impact his first season with the Panthers and now reflects on his path that led him to Georgia State. Nsoseme’s passion for basketball started late as a teen but has grown since his high school days in Canada.

“I started playing basketball six years ago, so not a long time [ago],” Nsoseme said. “The first thing I did was crash the boards as much as I [could] until I [got] a rebound.”

His 230-pound frame makes him one of the team’s strongest players, but his family is his primary motivation. The Congo is one of the poorest nations on Earth, ravaged by the effects of colonialism and sectarian violence. Growing up, Nsoseme was humbled. When he realized his talents, he sought to use it for his family’s good.

“The first thing I do when I wake up is pray for my family,” Nsoseme said. “I ask God to protect them.”

Coming out of high school, the three-star recruit committed to the University of Cincinnati in 2016. Nsoseme’s ability to be an aggressive rebounder and stout on defense led him to join one of the best programs in the American Athletic Conference, the Bearcats. During his tenure at Cincinnati, he won the conference title and coincidentally defeated Georgia State in the 2018 NCAA Tournament.

During his time with the Bearcats, Nsoseme was a ferocious rebounder and defender, and he averaged 1.6 blocks in 13.4 minutes per game in 2018. Nsoseme says his drive on the court came from his desire to help his family.

Never did Nsoseme believe that he would end up joining the same team he defeated just a year later. Before joining the Panthers, Nsoseme heard of the success of the Panthers from their run in 2015. The Panthers in the last decade have become arguably one of the best mid-major programs in the country.

“I saw [Ron] Hunter fall off his stool against Baylor,” Nsoseme said in a laugh about the former men’s basketball head coach. “I knew Georgia State had a really quality program.

While Nsoseme found success with the Bearcats, he was active only in a reserve role. When he looked at programs to transfer, he chose Georgia State due to its success and being able to impact the court. Nsoseme redshirted in 2019, but that has not stopped his enthusiasm for the upcoming season.

“I can’t wait to start playing,” Nsoseme said. “None of this would’ve been possible without God, and I’m excited for this journey.”

When head coach Rob Lanier recruited Nsoseme, he saw someone who could be a valuable Panthers asset. Georgia State has its work cut out for it as they face the Michigan Wolverines and crosstown rival, Georgia Tech, whenever the 2020-21 season begins.

Nsoseme’s journey, from the Congo to Cincinnati and now to Georgia State, is about perseverance and humble beginnings. While his stats on the court will only measure his impact, his influence will surely be felt off the court as well. Nsosme’s drive and determination will be much needed come the upcoming season for the Panthers.