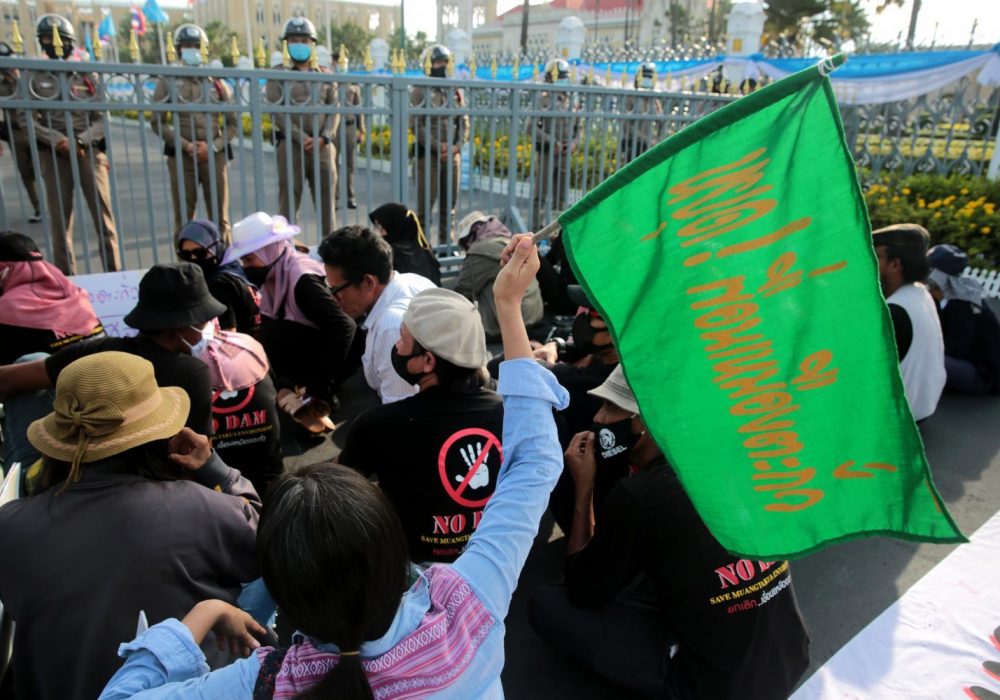 Villagers from Phatthalung opposing the Muang Takua dam stage a rally in front of Government House. (Photo by Chanat Katanyu)

Drenched with a heavy downpour on Tuesday night while picketing in front of Government House, Anong Kuson looked up at the ferocious sky, her face wet with tears mixed with merciless rain.

“I told myself this was just another test of our determination to protect our forests and our home community,” said the mother of three from Ban Muang Takua, Phatthalung province.

“I told myself never to feel discouraged, never to give up on our mission to stop the Muang Takua dam project. It will destroy our forests, waterways, our abundant nature. It will rob our children of life security and future. I will never let it happen.”

Ms Anong, 34, and some 20 residents who represented the Muang Takua community started picketing in Bangkok last week after the Phatthalung governor told them he had no power to stop the Irrigation Department’s controversial dam project.

Protests against the dam date back to over a decade ago. After being shelved by strong local resistance, the project gathered steam under military rule, prompting fresh resistance.

The Irrigation Department insists the dam is a royally-initiated project to provide irrigation water in the areas. Locals insist the dam will destroy lush watershed forests on the Banthat Mountain Range, the waterways that feed Phatthalung and Songkhla Lake, as well as ruin the sources of livelihoods of the forest communities that have lived there for generations.

Villagers pointed out the dam project details did not fit with local topography because they were copied from another dam in northern Thailand, making it a project based on lies and deception.

Despite the misinformation, lack of public hearings and the risk of harming the name of the royal institution, the Irrigation Department forged ahead.

To appease the social media outcry marked by public discontent against the status quo, an agreement was reached last week: a joint committee to find a sustainable source of irrigation water, together.

In short, the dam must go.

The agreement needs a green light from the prime minister. Earlier this week, Gen Prayut Chan-o-cha shunned the proposal and declared he would just delay the dam project for another year.

For the Muang Takua villagers, this is cheating big time.

The bad news is Ban Muang Takua is not the only place now under threat by environmentally destructive schemes by the government.

The list is long: The Chana Special Economic Zone in Songkhla. The Kaeng Sua Ten dam in Phrae. The water tunnel to divert water from the Yuam River in Mae Hong Son to Bhumibol dam in Tak. The massive reforestation schemes to evict forest dwellers.

The most destructive of all is the government’s recent push for the digging of the mega Kra Canal to connect the Gulf of Thailand with the Andaman Sea across the Kra Isthmus. Now dubbed the Thai Canal to rouse nationalism and backed by Chinese powers, its supporters believe the new maritime trade route would bring economic prosperity to Thailand.

While it remains in question who would benefit from the mega canal, the digging will certainly create massive environmental destruction on both coasts.

With the coastal ecology destroyed, millions of small-scale fishermen and their families will lose their livelihoods and face unprecedented hardship. The tourism industry, the country’s top income earner, will be destroyed. So will the large areas of protected forests and habitats of endangered wildlife.

Evidently, the mega canal will plunge Thailand into its most severe environmental disaster.

It is highly likely that the hardship will further aggravate the discontent of the southern Muslims against the government, leading to intensifying conflicts and violence.

Why have these megaprojects gathered steam in recent years after being shelved for so long? Environmentalist Prasitchai Nunuan blames it on the military dictatorship.

Since the 2014 coup, the military has been reducing the authority of local administrative bodies while increasing central control of the bureaucracy, said Mr Prasitchai, director of the Green South Foundation. The military has also lent its manpower to suppress local resistance in various controversial schemes, he added.

Under the climate of fear, dam projects are dusted, forest evictions intensify and several environmentally harmful laws sailed through a parliament dominated by big brass, bureaucrats, and military supporters.

For instance, the Department of National Parks, Wildlife, and Plant Conservation has given itself the power to rule the forests like military dictators.

The Ministry of Agriculture, instead of protecting the Thai populace, is blocking the ban of toxic farm chemicals to serve big business.

Instead of protecting public health, the Industry Ministry has fixed the law to allow small factories to release pollution freely.

Instead of punishing the trawlers which have destroyed the seas with overfishing and environmentally destructive fishing equipment, the Department of Fishery wants to give them cash.

Meanwhile, despite the public outcry, the government continues to allow other countries to use Thailand as the dumpsite of toxic waste.

“Abuse of power at every level is routine because the bureaucratic system runs without checks and balances,” he said.

That is why the grassroots movements, though supportive of the new charter to end military control, emphasise the need for bureaucratic reform and decentralisation.

“If the constitution fails to put decision-making power in the hands of local communities, we will continue to suffer the same top-down, autocratic bureaucracy. Without decentralisation, we will have to fight with the state schemes that destroy our livelihoods,” he said.

While the new charter is the long-term goal of the Ban Muang Takua protesters, their immediate concern is to stop the dam. The government’s order on Tuesday prohibiting all demonstrations near Government House also stirs fear of a crackdown.

“I’m not afraid,” said Ms Anong. Threat and intimidation are nothing new to the Ban Muang Takua villagers who defy the dam project, she said. “We are protecting the forests and waterways not only for our children and community but also for the country.”

The Irrigation Department plans to build 14 dams in Phatthalung. Four were already built not far from Muang Takua. The drought and poverty that inflicts those communities made the Muang Takua villagers determined never to let it happen to them.

If the irrigation authorities can complete their 14 dams as planned, they will massively destroy the watershed forests in the Banthat Mountain Range. “We must stop the destruction,” she added.

“If nature survives, we all survive. If we cannot tell our children we have won our fight, we are not going home.”