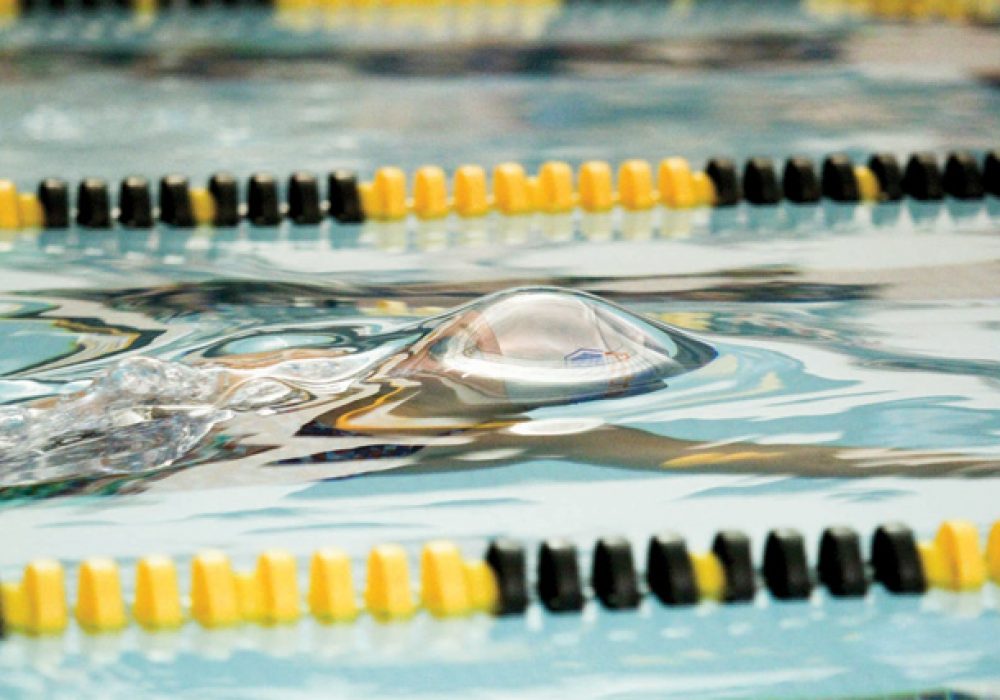 Editor’s note: In more than six years, Chris Schanz has taken thousands of photographs during his time as sports editor. In this “Photo Focus” series, he will take a look back at a handful of his favorite pictures and describe the story behind them.”

According to the Oxford English Dictionary, “inspire” is defined as to “fill (someone) with the urge or ability to do or feel something, especially to do something creative.”

Artists find inspiration from a wide range of sources.

Rembrandt inspired himself, leading to the famous painter creating dozens of self portraits. Claude Monet found inspiration from his gardens.

It’s perfectly acceptable for creatives, photographers included, to find inspiration from others.

The majority of accounts I follow on my social media are photographers and other digital creatives and influencers.

Years ago, I had come across a photo from Getty Images, one of the top visual media companies in the world, of the moment before a swimmer breaks the water during the start of a backstroke event.

I thought it was an incredible image, and wanted to do the best I could to recreate it.

Back in the 2014-15 school year, then-Jay County High School junior Anne Vormohr was in the midst of a historic year. She was a few months away from capturing her second backstroke state medal by placing fifth.

Claire Adams of Carmel, who later went on to be an 11-time All-American and Big 12 Swimmer of the year twice at Texas, was the eventual state champion.

After seeing the Getty photo of the surface tension, and the fact Vormohr would be the best female backstroker I’d probably ever get to see, I knew she’d be the one swimmer most capable of helping me reach the goal of making such an image.

I had tried to create the image at a handful of meets earlier in that 2014-15 season, but I just couldn’t seem to get the timing right. I’d either misjudge the spot in the pool where Vormohr reached the surface and I’d miss the moment, or the shutter releases on my camera — the click you hear the camera make each time an image is captured — was a split second too early or too late.

I was just unable to make the image and it frustrated me.

But I kept trying.

Vormohr kicked off the wall to begin the 100-yard backstroke. Under the surface she went, kicking her legs like a dolphin’s dorsal fin while reaching out above her head for minimal hydrodynamic drag.

I tracked Vormohr underwater as she traveled from my left to right, anxiously awaiting for her to reach the surface. As she approached, I put pressure on the shutter button to start taking photographs.

The first six in the sequence show calm water. The seventh shows a slight bump in the surface, and the eighth is the image I was hoping to get and the one which accompanies this story.

Below the surface, Vormohr’s right arm has made its way toward her torso to begin the first full stroke above the water. Her left arm is heading in the same direction.

By now, Vormohr’s head is about 3 inches above the surface of the water, but it has not yet broken the tension at the top. Her head is completely covered by a thin layer of water, and her goggles and nose piece are not quite to the surface.

For a brief moment, Vormohr’s cap-covered head has created a bit of a wake in the water between her body and the surface, and the photo shows the area about to be violently disrupted by her right arm breaking the water and her first exhale.

The next frame, the one right after the one pictured, has Vormohr’s right arm above the surface, with her left nearly directly below her. There’s still a small layer of water wrapped around her head a millisecond before she fully breaks the tension. The wake behind her face as she exhales has gotten bigger.

But it’s not as close of a resemblance to the image which inspired me in the first place.

I’ve found swimming to be one of the hardest sports to shoot. There are only four strokes (and diving) so essentially the pictures never change; just the people do. So finding inspiration of different ways to document a meet can become challenging.

Water sports, however, can make for some pretty fun photographs. I try to recreate, or even improve on, this Vormohr photo each year.

But there’s a reason why most of the people I follow are fellow sports photographers — it’s so I can draw inspiration from my peers.

Because it’s never a bad idea to get fresh takes so creativity doesn’t go stale.