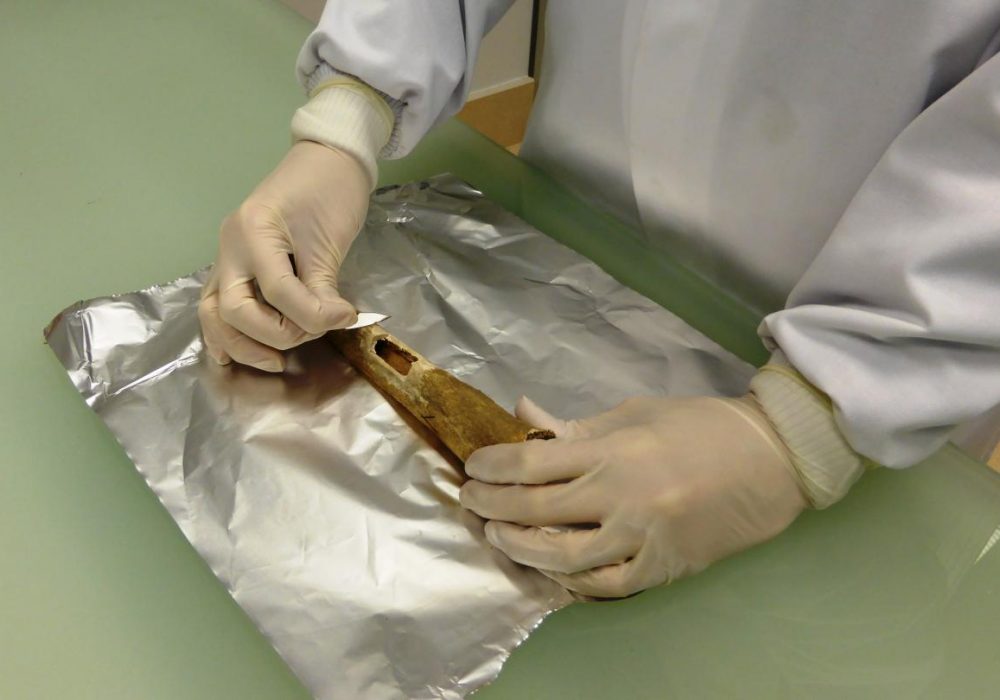 It is estimated that around 114,000 people disappeared throughout Spain during the Spanish Civil War and subsequent dictatorship. Unfortunately, eight decades on, only a small percentage of these people have been found or identified, with around 9,000 victims from 700 mass graves (of which it is thought there are approximately 2,000) being recovered in the last fifteen years. As time goes by and the samples themselves continue to deteriorate, conventional methods are no longer precise enough to identify the remains of all these unknown people. However, genetic analyses constitute an effective tool for this purpose.

The BIOMICs research team at the UPV/EHU has spent the last ten years working to identify these disappeared persons by genetically analysing bone and teeth samples taken from remains recovered from various mass graves dating from the Spanish Civil War and subsequent dictatorship and comparing the results with DNA taken from family members. ‘Once DNA has been obtained from the remains, we analyse a series of specific genetic markers, depending on the type of kinship relationship we wish to study,’ explains Doctor Miriam Baeta, a member of the BIOMICs research team working at the University of the Basque Country’s Department of Zoology and Cellular Animal Biology.

The aim of the genetic analyses is to determine the profile of the remains or to gather enough information to enable the team to compare them with the profiles of presumed family members or the information contained in the database of the DNA bank of relatives of disappeared persons. Data is also sometimes stored in the database itself in the hope that it will match future family profiles yet to be included. Each case is different because ‘for example, if you want to analyse paternal lineage, you study the Y chromosome; but it you want to analyse maternal lineage, then you have to focus on mitochondrial DNA,’ explains Dr Baeta.

We are increasingly able to study smaller and smaller markers

The task of identifying human remains is a complex one ‘because we are talking about post mortem DNA, which is often extremely degraded, making it hard to obtain a complete genetic profile,’ continues Dr Baeta. ‘Identification or coincidence is easier to prove when more markers are studied. Moreover, in many cases, the most suitable relatives are not available, meaning that the ones still alive are not close enough or the markers obtained cannot be compared with those from the DNA samples of living family members,’ she adds. Dr Baeta highlights the importance of the DNA bank of relatives of victims, ‘so that more comparisons can be done during future exhumations’.

She claims to be optimistic, since ‘thanks to technological advances, we are increasingly able to study smaller and smaller markers, which have a greater chance of success in the analysis, because being smaller, they are better able to survive degradation.’ Over the ten years that the team has been working in this field, many advances have been made that have enabled them to optimise the identification system. ‘Among other things, we have optimised the DNA extraction systems, as well as various different steps throughout the process with the aim of obtaining more informative profiles. We are constantly striving to improve every part of the process,’ she explains. The latest advance proposed by the team ‘enables us to study smaller fragments of mitochondrial DNA. Thanks to this technique, we can do an initial screening to dismiss, in a cost-effective manner, possible relationships through the maternal lineage; in other words, it makes it easier to determine maternal kinship: only if there is a coincidence in this first phase is it worth applying the methodologies used to date to analyse mitochondrial DNA.’

Researchers in the team have published a paper in which they present all the knowledge acquired over the past ten years. In specific terms, they explain the techniques and procedures used to identify 525 human remains. To enable this identification, they obtained saliva samples from 879 presumed relatives, enabling them to identify 137 disappeared persons. No informative profile was obtained for 17% of the samples analysed, as a result of limited DNA or degraded samples; however, profiles were obtained for another 297 human remains that, despite everything, had previously remained unidentified. ‘In general, we obtain profiles for the majority of skeletal remains, but we do not have suitable relatives with which to compare them,’ clarifies Dr Baeta.

She then comments that ‘when we manage to identify someone it is a very happy moment, because in addition to the joy of the outcome itself, we know there is a lot of complicated work behind the result. At the end of the day, it is a collective effort by our team and the Aranzadi Science Society, the Gogora Institute and the associations of victims and relatives of people who disappeared during the Spanish Civil War and subsequent dictatorship.’

The BIOMICs research team, led by Professor Marian Martínez de Pancorbo from the UPV/EHU, is a multidisciplinary group working in the fields of biosciences and microtechnologies. One of the team’s many avenues of research is archaeogenetics, where they study (among other things) DNA taken from human remains in order to help recover our historical memory. In this sense, BIOMICs works in close collaboration with the Aranzadi Science Society, which in addition to exhuming the remains from mass graves, also analyses everything recovered from an anthropological perspective (basic biological data such as sex, age at death and possible cause of death, etc.). Members of the team also highlighted the work being carried out by the Gogora Institute for Memory, Peaceful Coexistence and Human Rights (Basque Government), the Regional Government of the Balearic Islands and the associations of victims and relatives of people who disappeared during the Spanish Civil War and subsequent dictatorship.

Disclaimer: AAAS and EurekAlert! are not responsible for the accuracy of news releases posted to EurekAlert! by contributing institutions or for the use of any information through the EurekAlert system.