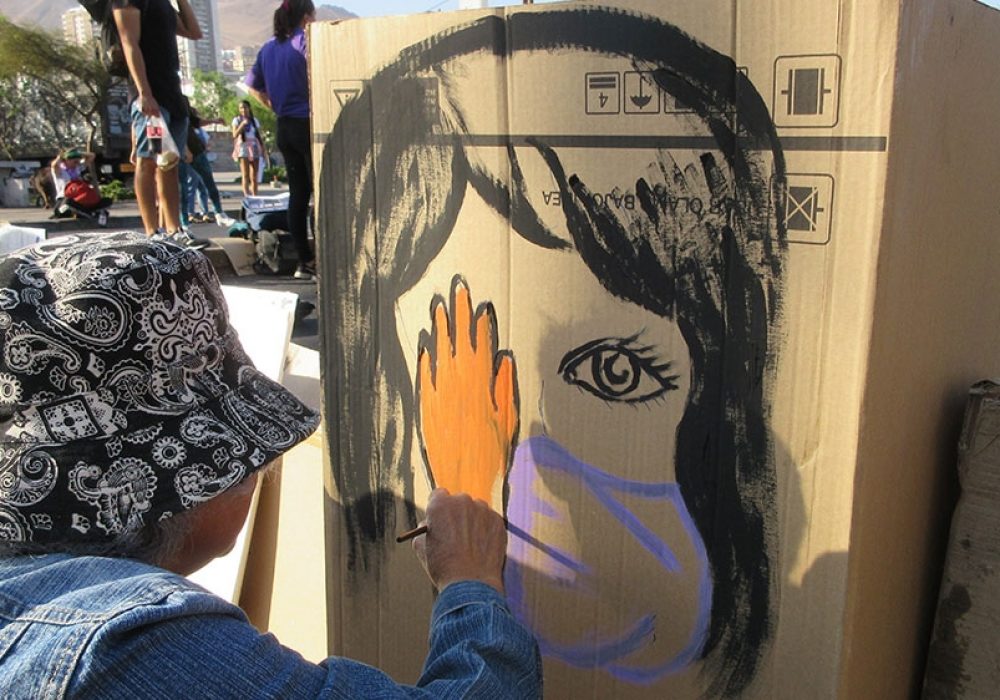 Antofagasta, Chile – Beatriz focused on her brush strokes, paying no attention to the cars rushing through the busy intersection behind her. The street was already partially blocked by women preparing to march Monday, day two of a feminist strike in Chile.

“I have problems with my feet, so I cannot march, but I came here to help out,” Beatriz, who requested only her first name be used, told Al Jazeera while painting a sign as she sat in the blocked street in Antofagasta, a city 1,335km (830 miles) north of the capital.

“I support this struggle because I think we are in a pseudo-democracy that has never been a true democracy,” the 65-year-old said. “This whole process that women are developing is so important, because we are still in an absolutely machista (male chauvinist) state.

More than a million women took part in International Women’s Day marches in Chile on Sunday, but protests are far from over. Marches, rallies and work stoppages continued on Monday in response to calls for a feminist strike, nearly five months into broader protests against structural inequality.

High school student demonstrations last October set off nationwide mass protests for systemic change, including the overhaul of education, health and pension systems. Protests have continued despite continuing police crackdowns that have resulted in thousands of arrests and injuries.

On her cardboard protest sign, Beatriz used orange paint to colour in the hand a woman was holding over her eye, a now-ubiquitous gesture to protest the more than 445 documented eye injuries, most of them caused by police buckshot projectiles and tear gas canisters.

Monday’s feminist strike action was not Beatriz’s first protest by a long shot. She participated in protests against the military dictatorship of General Augusto Pinochet. Thousands of people were killed and forcibly disappeared for political reasons during his 1973-1990 military regime.

“We still have not overcome the dictatorship,” said Beatriz. “All the pseudo-democratic governments we have had have not made the changes the people hoped for.”

In Antofagasta, northern #Chile, while gathering in preparation to march today, women perform the #LasTesis A Rapist in Your Path chant: pic.twitter.com/2xi4RBuZ9O

Beatriz believes a new constitution could be an important step. Chileans will vote on whether or not they want one in an April 26 plebiscite. Chile’s bicameral congress passed a bill last Wednesday that establishes a formula for gender equality among citizens elected to the likely eventual constitutional convention.

“But we need to keep making changes to create a more just country,” said Beatriz. “We do not have a just education system, just health, or just housing.”

Pensions are also a top priority issue for Beatriz and a majority of Chileans. President Sebastian Pinera has introduced measures to increase monthly minimum pension payments and address the gender disparity, but protest movements have been fighting for years to get rid of the privatised pension administration system developed by Pinera’s brother during the Pinochet dictatorship.

“I am supposedly retired, but I have to keep working because I cannot get by,” said Beatriz, a longtime teacher whose pension payment of roughly $350 a month does not cover her cost of living.

More than anything, however, Beatriz wants people to keep protesting and pushing for systemic change so that young women and all youth and children have opportunities and hope for their future.

‘It was the women’

Young people did just that on Monday, picking up where Beatriz left off and marching with her painted cardboard protest sign to a central plaza in Antofagasta. Marches from other sectors of the city were on their way, and education, health and other workers adhering to the feminist strike were beginning to congregate at a multi-generational rally in preparation for a united march.

“I find it powerful,” Daniza Olivares told Al Jazeera in the plaza, where women from various sectors were taking turns at a microphone to address the crowd.

Now 69, Olivares began protesting decades ago. In 1983, she and other women in Calama, 217km (135 miles) northeast of Antofagasta, organised a cacerolazo noise demonstration against the dictatorship, banging pots and pans for half an hour at night with all the lights out to make it harder for authorities to identify which houses were participating.

“The men did not want to be involved in anything,” she said. “It was the women.”

As a feminist march passes by in Antofagasta, a woman holds a sign that reads, ‘What I did not have for myself, may it be for them.’ [Sandra Cuffe/Al Jazeera]

Olivares joined the feminist strike day march on Monday that started in Antofagasta after hundreds of women performed the choreographed A Rapist in Your Path chant in the plaza. Now a global phenomenon, the feminist anthem created by Chilean collective protests against institutionalised rape culture and state and police violence against women.

Carabineros police special forces eventually cracked down on the march on Monday in Antofagasta, using tear gas to disperse the crowd. Olivares hopes that younger generations of women will continue to protest for truth and justice not only in the face of human rights violations now but especially also those of the past, during the dictatorship.

“There are still women of my age in Calama searching for the remains of their [forcibly disappeared] loved ones,” she said.