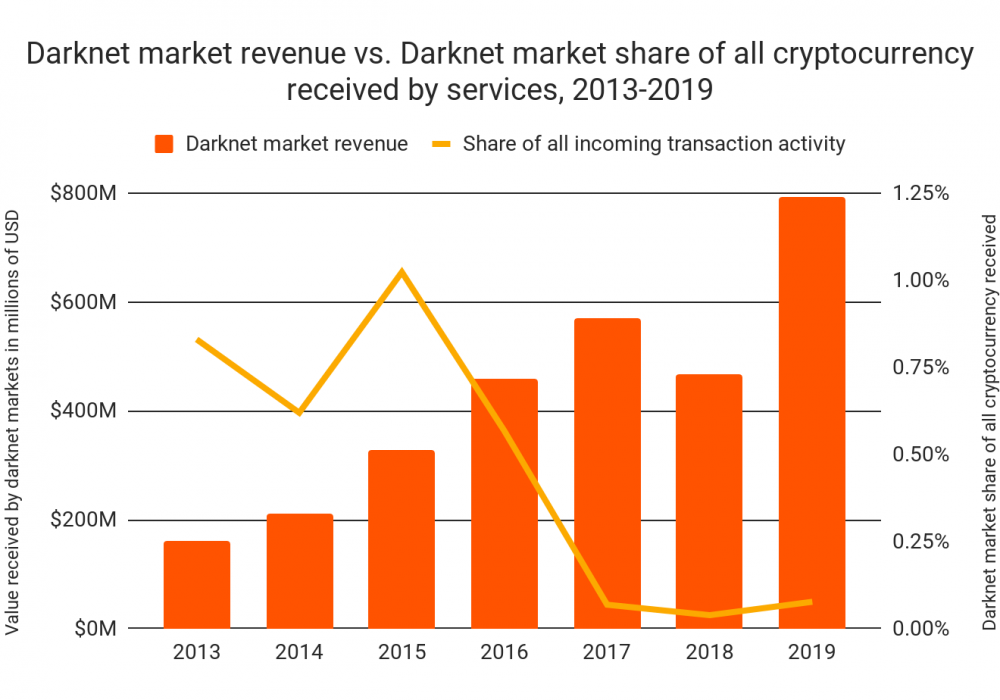 The volume of cryptocurrency flows coming on darknet markets have doubled for the first time in four years, a new study says.

In part of its 2020 Crypto Crime Report published on Jan. 28, Chainalysis — a New York-based blockchain analytics firm — found that darknet markets have significantly increased their share of total incoming crypto transactions in 2019, doubling from 0.04% in 2018 to 0.08%.

Crypto on darknets is resilient to scrutiny by law enforcement

According to the study, total market sales in crypto grew 70% in 2019 to account for more than $790 million worth of cryptocurrency after seeing a small decline in 2018. This was the first time when sales surpassed $600 million, Chainalysis says.

Despite the total share of crypto payments on the darknet remaining quite low, the recent growth of volumes indicates the resilience of darknet markets to increased legal scrutiny from global regulators, Chainalysis believes. According to the firm, the total number of active darknet markets remained stable in recent years despite heightened law enforcement.

Specifically, the study suggested that as some markets close, others still manage to fill the gap and satisfy client demand. While eight of the markets active in 2018 were shut down in 2019, eight new ones opened up that same year, keeping the total number of active markets worldwide at a steady 49.

Possible reasons behind the surge

According to Chainanlysis, the increasing share of cryptocurrencies coming to darknet markets is purportedly caused by the implementation of new technologies, which makes the operating process more decentralized. In order to avoid shutdowns by law enforcement, some darknet markets are adopting new infrastructures that have a fully decentralized structure, which is similar to the Tor web browser or “to the blockchain itself,” Chainalysis noted.

As part of the study, Chainalysis said that it expects to see more darknet markets accepting or even requiring the usage of privacy-oriented cryptocurrencies such as Monero (XMR). In January 2019, the company found that the value of Bitcoin sent to darknet markets had increased by 70% in 2018.

As global regulators and enforcement authorities are doing their best to shut down darknet markets operating with cryptocurrencies, new arrests reports keep coming in. In early January 2020, a citizen of the United States was charged with illegal narcotics distribution in exchange for Bitcoin.

While some marketplaces are being shut down, others are making even more ambitious expansion plans to go beyond their primary focus of distributing illicit products. Russia’s largest darknet marketplace announced plans to raise $146 million in a token offering that would allow it to go global in late 2019. Announced by Hydra, an illegal marketplace for illicit substances, the token sale is in no way legal in terms of global securities laws.