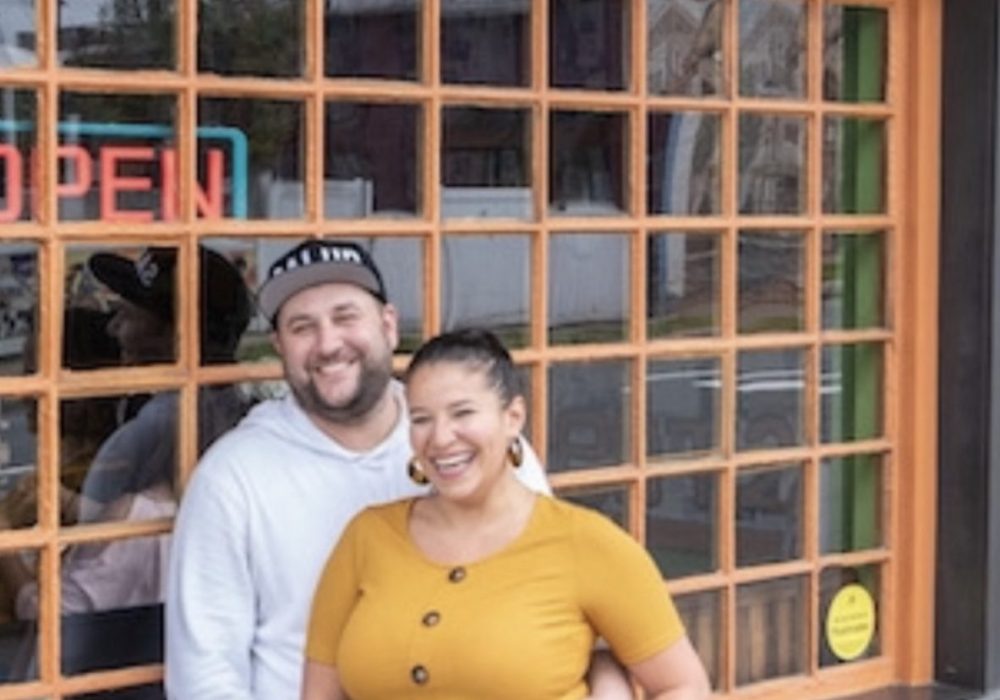 I’ve been to over 550 breweries so it is pretty rare for a taproom to “wow” me at this point. When I walked into Salud Cerveceria for the first time a little over a year ago after moving to Charlotte, my jaw dropped.

Lounge seating, string lights, local art on the walls, fresh flowers on the tables, a DJ stand in the corner, a shuffleboard table, a coffee bar, Neapolitan-style pizza and the list goes on. There were a variety of people in the brewery as well—a mix of races, ages, and genders—something not true for most breweries around the world, and definitely not true for most breweries in Charlotte.

I instantly felt at home. I ordered a flight, which came in an old cigar box, and went to sit on the lounge-style bench covered in pillows in the corner with my laptop. Since that first day I visited Salud I knew it was a special place. After visiting many times since then and getting to know the owners and the bartenders, I have a better understanding what it makes it just so special.

The Roots of Salud

Jason and Dairelyn Glunt are the masterminds behind Salud Beer Shop and Salud Cerveceria. Jason moved to Charlotte from Northern Michigan when he was young and decided to stay in town to play basketball at Queens University. Dairelyn moved to the Charlotte area from the Dominican Republic when she was young as well.

They both moved into the corporate world after years in the service industry, but two weeks into his new office job Jason decided it was time to quit and open a beer store. Dairelyn, on the other hand, loved her corporate job and remained in her role while Jason began his pursuit. She says, “He hated being in a cubicle, I loved it!”

They were living in the NoDa neighborhood of Charlotte at the time, and luckily found a perfect space for their beer shop just up the road from their apartment. They opened the doors to Salud Beer Shop on March 15, 2012 with four taps and a few shelves of cans and bottles.

Eventually the space upstairs above the beer shop also became available and they decided to expand and open Salud Cerveceria, a brewery and taproom. The road to opening the brewery had its share of difficulties. The space had five different kinds of flooring, walls where they didn’t want them and a slew of other renovations that needed to occur before they could open the doors. Then, just when they were wrapping up and ready to open, a shop-vac caught on fire. They had to redo the floors, repaint, redo the bar, and replace the windows and door.

The doors finally opened on June 5, 2017 and their bad luck continued. Their first brewers did not work out, and at times they only had two of their own beers on tap. People were starting to talk, but finally they were able to get a new brewer from Shelby, North Carolina’s Newgrass Brewing and Salud Cerveceria took off.

When they opened upstairs they also decided to have a coffee shop with the brewery/tap room and initially subleased the space to Trade and Lore, a local Charlotte coffee business. Recently they took over the coffee part as well, and now have the beer shop, brewery, coffee and food under their own umbrella.

Today, Salud is doing things differently than a lot of breweries around the country. Salud is not focused on growth—they are focused on tweaking the menu, training the staff and strengthening what they have. The Glunts said, “We don’t want to be like every other brewery out there and have no plans to open a second location like a lot of local spots have decided to do.”

They are also working on canning their beer more. Each can label at Salud has a story behind it. Their cans feature someone’s face in relation to that specific beer, a tradition they plan to continue. Soon their Dairelynerweisse series will have their own crowler labels as it becomes a mainstay.

Downstairs, Jason and Dairelyn have cultivated a top-notch beer bar and bottle shop. Don’t just take my word for it, Salud won the top spot for Best Beer Bar from USA Today in 2019 and is again in the contest this year with results being announced on March 27.

Jason says, “I carry what’s best…otherwise you’re just another beer bar.” His favorite part of the job is selecting the beers for downstairs. He does his research to ensure he is on top of the game, as Dairelyn says, “this guy stays up until like 2 a.m. reading!”

Salud made the choice not to put local Charlotte beer on tap because “you can get it anywhere in town. We support local breweries by selling their package beer in the bottle shop.” They also don’t carry AB InBev products because as Jason says, “they do a lot to hurt the small, independent beer scene.”

Because of the reputation they have built, breweries and distributors frequently reach out to Salud to host tap-takeovers, can and bottle drops and event pre-parties. In the last year they have had selections from New York’s Other Half Brewing, Belgium’s Brasserie Cantillon, Tampa’s Garagiste Meadery, Miami’s J. Wakefield Brewing, and so many more incredible breweries, wineries, cideries and meaderies.

The Glunts added natural wine to the offerings three years ago, a choice that has hugely paid off now that it is a worldwide trend. They even have a “vino y queso” night upstairs in the brewery once a month with wine samples and unlimited cheese. Yes, it is as magical as it sounds.

Events are huge part of Salud and help add to the fun vibes. Dairelyn says, “we’re constantly having to stay relevant,” so the events help to set them apart from the other local watering holes. In the summer they host porch parties on the patio on Sundays with a DJ and once a month they host an old school house music dance party called Gravitate.

Noche Latina is one of Salud’s most popular events. The Latin community in the craft beer scene “is a whole demographic that gets ignored” they said. Once a month they host a dance night upstairs with a free group class to start things off, and then a DJ comes on “bringing the Latin vibes” until 2 a.m.

The Glunts say, “we take pride in being diverse…we’ve always had a diverse crowd, and we love that people feel comfortable here no matter of their race, gender, sexuality or anything else. “Everyone’s welcome,” and you feel that when you walk in the door both upstairs and down.

First you must decide: upstairs or downstairs? As Jason and Dairelyn describe, “each space is special in their own way.” The old building aesthetic definitely helps create the vibes, and both Jason and Dairelyn’s taste comes through. Downstairs, Jason’s old record labels and love for the University of Michigan cover the walls. Upstairs, Dairelyn designed the cozy and colorful setting. They like that “it doesn’t feel stiff” and I couldn’t agree more; both spaces are welcoming and warm, but in their own unique ways.

Once you have decided what vibe you are going for, it’s time to select your beer(s):

Dairelyn’s favorite beer they make is Dairelynerweisse, she says “each variation gets better…it took four years of trying for me to like sour beers, but now I love them.”  Her favorite beer that they don’t make is You’re All That I Knead, a tart sourdough IPA from Charlotte’s Free Range Brewing.

Jason’s favorite beer they make is Una Fria, an Italian-style Pilsner, and his favorite beer they don’t make is Luppolo from Oxbow Brewing, another Italian-Style Pilsner. He also shared his love for his home state of Michigan breweries, particularly HOMES Brewery in Ann Arbor and Speciation Artisan Ales in Grand Rapids (two of my favorites as well!).

My favorite beer that Salud makes is the Mixed Berry version of the Dairelynerweisse series, and I have continually harassed them about when they will have it back on tap (don’t worry, it’s coming soon). Everything they make is fantastic, but being the basic beer girl that I am, my favorites are of course their juicy IPAs, their adjunct-loaded Imperial Stouts, and their fruited sours.

During #Coronavirus2020 Salud is offering curbside pickup and delivery for beer and food!