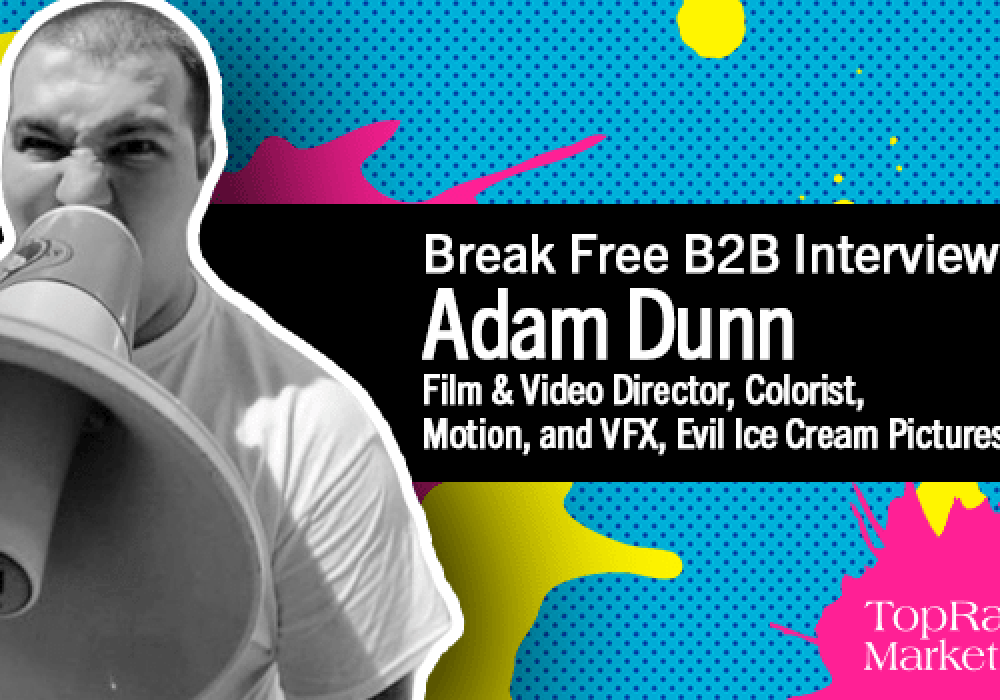 Given that our job is dependent on earning and keeping an audience’s attention, marketers are wise to take cues from entertainment-focused content formats like films and music videos. Even more so, we’re wise to take cues from the creators behind them. In a nutshell, that’s why Adam Dunn offers a particularly valuable perspective for people in our line of work.

As a film and video director who has worked on numerous prominent music videos and Hollywood movies — including “Spider-Man: Into the Spider-Verse”, for which he and his team won an Academy Award — Adam is fervently focused on creating content that is compelling and captivating for audiences. At TopRank Marketing, we’ve also had the opportunity to work with him on several video marketing initiatives, seeing first-hand how his expertise can take such efforts to the next level.

It’s often the thing that is imperfect that eventually becomes the thing people like the most, which is why Spiderverse became the thing that everyone loved. — @adamjdunn #VideoMarketing #BreakFreeB2B Click To Tweet

In this edition of Break Free B2B, TopRank President Susan Misukanis and I were thrilled to sit and chat with Adam about a variety of topics pertinent to marketers today. We asked which elements of his work tend to resonate most with audiences, what his recommendations would be for budget-friendly video content, how new technologies like live-streaming and VR are coming into play, and more.

This was actually the first episode of the show that was recorded, but we decided to warm you up with some rising stars and familiar faces in the B2B space first. Today we’re excited to share this conversation and branch out to more of an outsider’s perspective.

(Note: There were some technical difficulties with the microphone on our end. But we didn’t want to let that prevent you from hearing Adam’s awesome insights; please bear with us!)

If you’re interested in checking out a particular portion of the discussion, you can find a quick general outline below, as well as a few excerpts that stood out to us.

Nick: As you look back at some of the things you’ve worked on — I’m especially interested in the music videos where there is a lot of content, a lot of competition, hard to stand out … When you look at the ones that are the most well received, and gained the most traction, do you see any common elements that are making those resonate?

Adam: I don’t know if there’s one common through point. But I think the biggest thing from all the ones that I’ve had that are successful is cohesiveness of vision.

So while all the videos are totally different, making sure your team is 100% on the same page when making the content is what makes the most successful stuff on my end, just because you know, there have been videos where things have been a little bit crazy and we haven’t had we’d have a ton of time to shoot or anything like that, and we had to just kind of Helter Skelter, throw it all together to make something. And it doesn’t come out nearly as cohesive as something where the whole team knows exactly where everything is going, all the pieces fit, and then you make this beautiful piece of art and everyone loves it …

How that could translate into something like B2B would be like, when you do an explainer, making sure you have that exact A to B to C lined up, ready to go. And that way when you make the explainer, everyone knows exactly where all the pieces fit, everything looks beautiful, and you make this amazing piece of content.

Nick: We’ve had the opportunity to work with you on some B2B marketing projects. What interests you about video marketing and where do you see it going?

Adam: I think video marketing is intriguing, because it brings in real-life storytelling. You bring in these experts and influencers who know exactly the topics are talking about — you get to meet them and watch how passionate they are about what they’re involved in. So you get to learn this really cool stuff.

Like, when I first started working with you guys, I didn’t know a ton about B2B marketing, but I feel like I at least have a ground framework now from getting to be around a bunch of experts and talking to influencers and stuff. So that’s what intrigues me about it from my own on my own personal level, is getting to see these people who are super passionate and know everything.

Nick: So for someone who’s in B2B marketing and interested in doing video but doesn’t have an Academy Award winning effect specialist on hand, and maybe doesn’t know where to start …

What would be some recommendations for those with a finite budget and limited resources to create something that is high-quality and looks professional?

Adam: I would say probably the very first place to start if you’re looking to get started on doing video and you have a limited budget would be to invest as much money as you can into your kit, first and foremost, because that’s the thing you’re gonna have all the time. So your camera, the lighting gear, your microphones, those kinds of things.

With cameras you can make a lot of really professional, nice amazing things even on an iPhone now, so for camera, you have the tools at your disposal. One of the things that trip people up in a professional environment is audio-related. It’s like if you have something like tons of hum and pops and things like that, that’s something that can trip up professionals. So getting a nice microphone is usually a good spot.

But a really good thing just for starting, and what I say when I end up lecturing back at my old school, is always just start. Just start making things and just dip your toes in the water because you’re never going to get great without just doing. So you need to do it in the early days and you know what if maybe the early ones aren’t as great as the ones that happened later, and that’s exactly what you want.

Just start making things and just dip your toes in the water because you’re never going to get great without just doing. @adamjdunn #VideoMarketing #BreakFreeB2B Click To Tweet

Stay tuned to the TopRank Marketing Blog and subscribe to our YouTube channel for more Break Free B2B interviews. Here are a few interviews to whet your appetite: