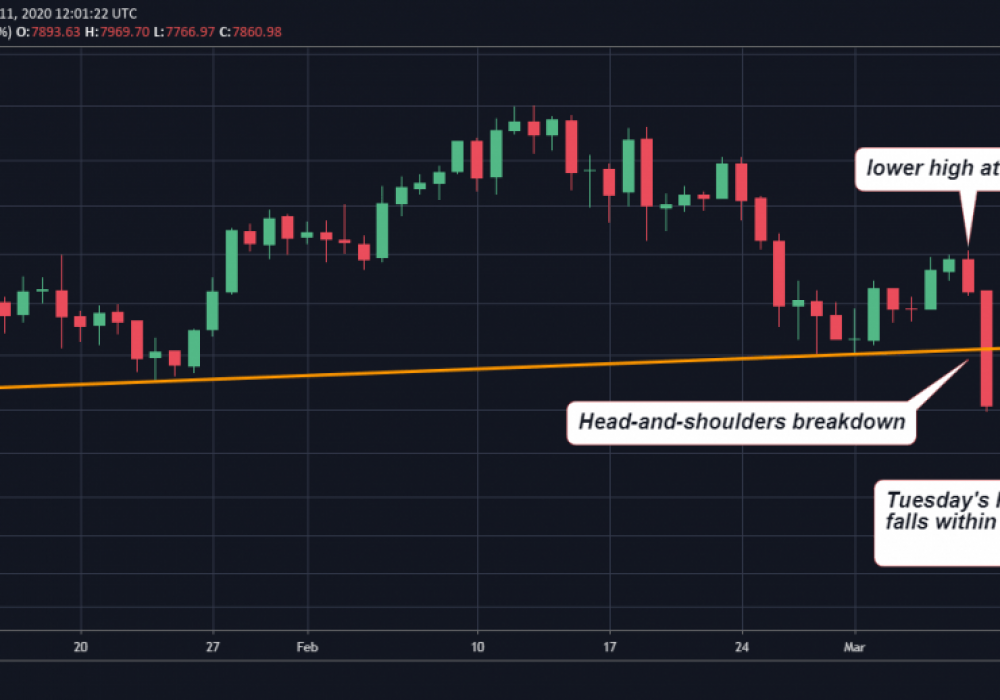 The top cryptocurrency by market value is currently trading near $7,830 – up just 9.3 percent from the year’s opening price of $7,160, according to CoinDesk’s Bitcoin Price Index.

Just a month ago, the cryptocurrency was reporting a year-to-date gain of over 45 percent. Back then, prices were trading at multi-month highs near $10,500.

Bitcoin’s recent price slide has occurred alongside a sell-off in the traditional finance markets.

The S&P 500, Wall Street’s equity index and a benchmark for global equities, topped out near $3,400 in mid-February and fell to a nine-month low of $2,739 on Tuesday. The index is currently down 10 percent on a year-to-date basis.

West Texas Intermediate (WTI) oil prices nearly halved to $27 in the two weeks to March 9 and are currently down 45 percent from the yearly opening price.

Though often touted as a safe haven, bitcoin looks to have behaved as a risk asset in line with traditional markets, as macro events prompted investor doubts.

”A general sense of uncertainty seems to be the driving factor of investment decisions made by retail investors across different investment types, including bitcoin,“ said Ashish Singhal, CEO of cryptocurrency exchange CoinSwitch.

At press time, European equities are flashing green, possibly on the back of a surprise 50 basis point rate cut by the Bank of England.

Broader market sentiment, however, remains risk-averse with the futures on the S&P 500 down 2 percent, as the coronavirus spread is showing no signs of slowing down outside China. Meanwhile, oil prices on both sides of the Atlantic are down at least 1.5 percent.

The technical charts, too, suggest the path of least resistance is to the downside.

Bitcoin remains in bearish territory below the head-and-shoulders neckline resistance, currently at $8,460.

The cryptocurrency has produced a narrowing price range over the last two days, with Tuesday’s candle falling well within Monday’s high and low.

Such price action following a notable drop is indicative of seller exhaustion, but would be confirmed only if prices rise above Tuesday’s high of $8,158. That could bring additional gains toward $8,460.

Alternatively, a break below Tuesday’s low of $7,734 would imply a continuation of the sell-off and open the doors to support at $7,130 (200-week average).

A bullish reversal would be confirmed if and when prices rise above $9,219 (March 7 high), invalidating the lower-highs setup.

However, Alessandro Benigni, co-Founder at coinsflare.com, an exchange listing monitoring portal, thinks a new bullish trend will start soon, pushing prices to around $11,000 by the end of March/early April.

The possibility shouldn’t be ruled out as bitcoin has historically performed well while heading into the reward halving, according to Nischal Shetty, founder and CEO of WazirX, told CoinDesk. The next miner reward cutting event is due in May.

“There are 61 days to go for the bitcoin halving. Looking at past data, bitcoin prices have seen an uptrend after halving [events]. Also, more countries are coming with positive regulations on crypto. I’m optimistic that these factors combined will have a positive impact on bitcoin’s price,” Shetty said.

Edit (13:15 UTC, March 11, 2020): A previous version of this article mistakenly stated that bitcoin is up this year by just 8 percent. It is actually up 9.3 percent. This has been corrected.